I've Seen the Future and It's Knitted 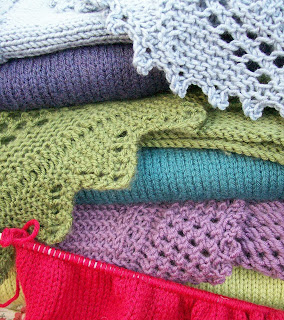 Well, back after a summer of not much blogging, but quite a lot of knitting. Have I any readers left?

I think I've mentioned before that I used to be a keen knitter when I was younger. At that time though, I knitted purely to obtain the finished garment. I would sit and knit all evening after work just to achieve the finished item so I could wear it. (Should have got out more!) 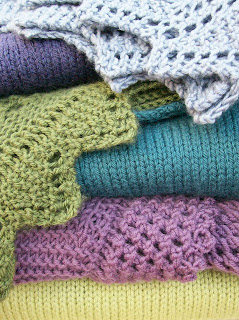 But all that has completely changed with this second wave of knitting. Now, the reward is all in the process. It's so pleasant to sit in a tranquil state accompanied by the gentle rhythm of needles and yarn, or "wool" as it's still generally called in the UK, regardless of the fibre content!

I've even made a couple of cardigans - once I had come to terms with the fact that I can't now knit the same size I knitted 25 years ago! 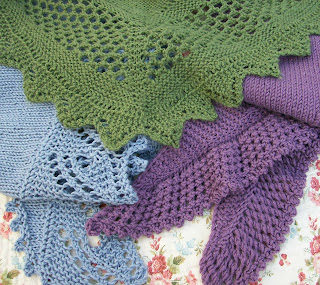 Do you think I'll have enough scarves this winter? 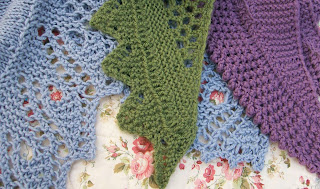 The grey scarf pattern was from a recent issue of Yarn Forward magazine and is by the exceptionally talented Ysolda Teague. The other two patterns I found through Ravelry.
If you want to find them in Ravelry, the green triangular one is called Aestlight and the purple ruffled one is Cinnamon Grace. 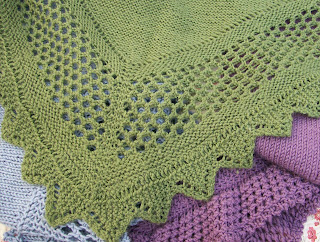 All these scarves were quick, interesting and fun to knit, and I learned a lot from the very clever techniques used in all of them.
If only it would get cold enough to wear a scarf. 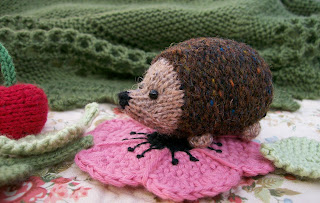 The hedgehog pattern is by Little Cotton Rabbits. Such fun to knit and so sweet. I love the small scale and his tiny feet. 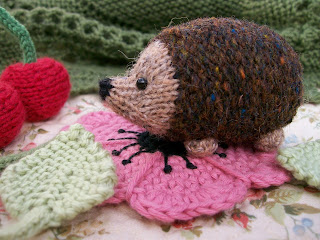 It's been quite a busy summer, with our younger daughter's graduation and of course lots of garden work. If we ever move I don't think I want quite such a high maintenance garden next time. 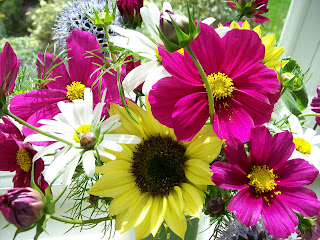 Some late summer colour from the garden. The sunflowers are a small variety called Valentine, which are long lasting and perfect for cutting.
I'll try not to leave it two months before I post again!
Posted by Knot Garden at 09:35