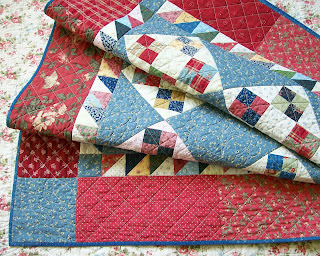 I've spent the past few weeks working on this quilt, which was a requested birthday present for someone. It's been given away now, but I remembered to take some photos and now I can show you it, finished, quilted and washed. 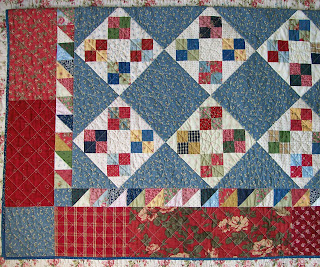 The spec was for a multicoloured quilt with red and blue predominating, with the fabric choices left to me.
I think it must be at least a couple of years since I made a quilt, so I thought my quilting wheels would be rusty, but amazingly, like riding a bike, it all came straight back. 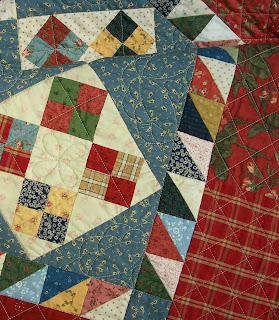 The idea was that it would be used for the seat area of a sofa. Fine, I don't mind if they sit on it. Also, part of the requirements was that it be twice the size actually needed, so it could be used folded. Hmm!
I stuck to the instructions though, and generally I'm pleased with how it turned out. I think the red border does a lot for it. 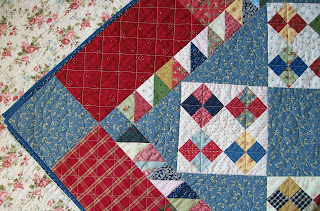 The best thing was, I was able to make the whole thing entirely from stash. The biggest thing was the backing, which I made by joining 3 shorter lengths. I already had the wadding, so the only thing I had to buy was thread. 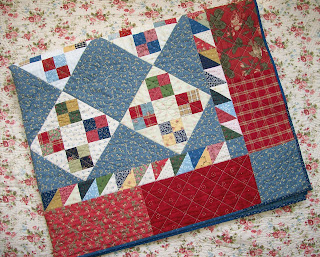 Some pattern info: The quilt is based on Amy's Four Patch, a 2003 pattern by Jo Morton, but I added an extra row of blocks to change the proportions. I also did the outer border pieced instead of all one fabric, and made the border wider. 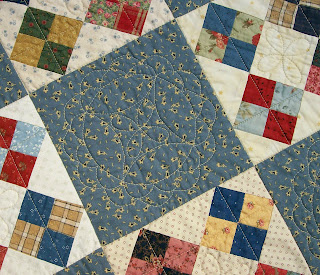 The circular motif I used for quilting the blue blocks is from 60 Machine Quilting Designs by Pat Holly and Sue Nickels, published in 1994 but still available. I've used this book many times. I reduced the size of the pattern to fit the block, and made templates to transfer the design. 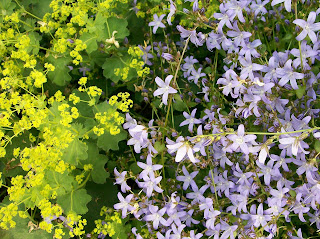 It's been too hot this week to do any work in the garden, so I've just been keeping the plants watered that need it, and making sure the bird bath's full.
I'm not keen on the heat, but it's nice to see the garden full of flowers again after a long cold winter. 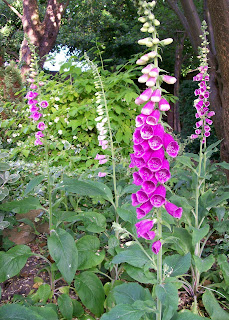 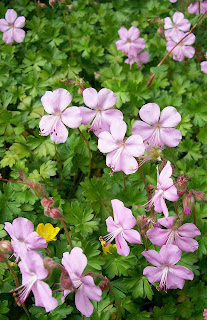