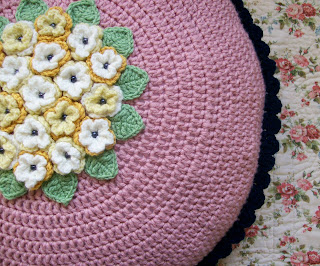 Another cushion, this time that blogland favourite, the round crocheted cushion. I expect you've seen plenty of these on your bloggy travels, and there are some lovely ones out there.
It's the second one of this type I've made, but this time I was able to find a proper round cushion pad to fill it. 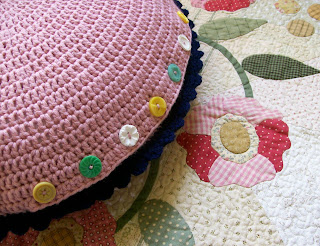 It's just a standard flat circle in trebles (US dc) with regular increases on every round. The flowers are 2-layer ones, examples of which can be found in many good crochet books, or there are free ones to be found online. The pattern I used was from here (Ravelry link). 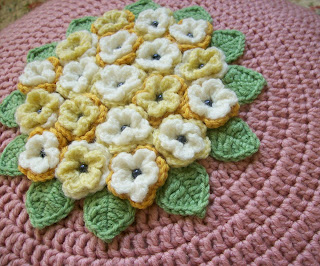 My flowers don't seem to look exactly like the pattern, but I liked this one because it has 5 petals. 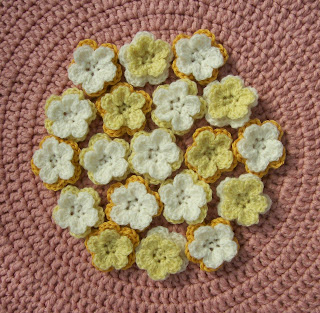 I couldn't find a pattern for the small fat leaves I had in mind, but it was simple enough to improvise a very basic one. 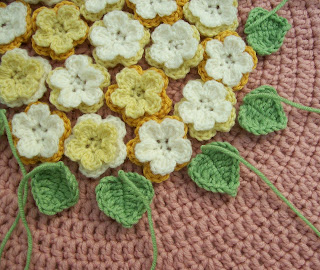 Here's a tip if you want to make a circle with a smoother curved edge. You can get a rounder shape if you stagger the position of the increases on consecutive rows. 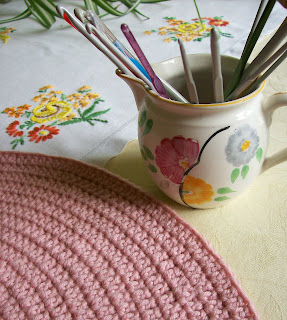 For example, if you move the point of each increase one or two stitches to the left on every round, and keep that consistent throughout, the pattern of increases will still be regular but will form a gentle spiral effect, and the edge will be more of a curve.
Other methods are just as good of course, it all depends on the effect you want. 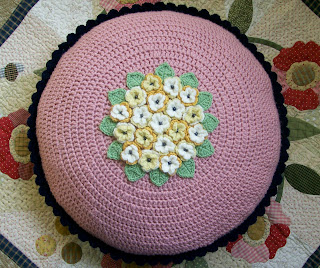 Yarn info: The yarn is a a real mixture - aran for the cushion, dk for the border and 4 ply for the flowers. This was because apart from the pink, I wanted to use what I already had, and now it's done I like the contrast in scale between the different yarn weights.
♥ ♥ ♥
Outside, I've been doing some late cutting back and overdue weeding between the rainy days this week. There isn't much autumn colour in the garden yet, but the leaves are starting to turn now. 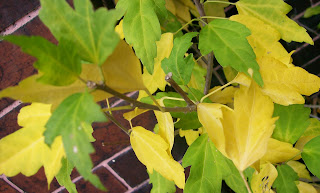 This hibiscus bush grows outside the dining room window. The leaves with the sun on them are such a pure yellow, the photo doesn't really do them justice.
Posted by Knot Garden at 16:08