I've been waiting in today for the washing machine repair man. Don't you hate that?
The problem was the door lock. A load of washing was stuck in there for four days and I couldn't open the door. Anyway he's fixed it now - apparently the door lock mechanism had come loose. I had to pay an exorbitant callout fee, and within a minute of him leaving I had the machine newly loaded and now it's humming away, after being unusable for four days in the heat. Sigh of relief.

It's been too hot to do any sewing and I've no current project to show you, but I've been taking some garden photos. 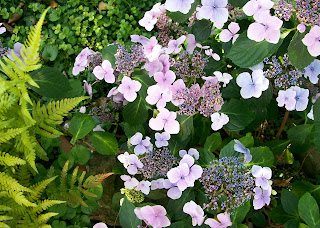 A lacecap hydrangea in dappled shade. This moved with us in a pot from our previous house, and now it's planted out in semi-shade. 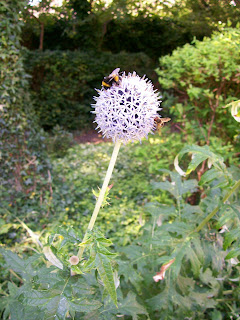 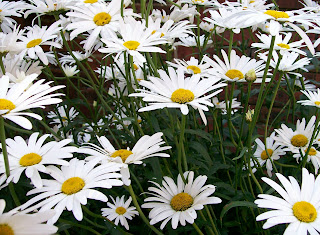 I don't know the proper name for these, but to myself I call them "giant daisies", lol. They were here when we moved in and they are good for cutting.
I've been asked to help spread the word about a new quilt swap. I'm a bit late with it but if you haven't heard about it and think you might be interested, check it out: Four Seasons Quilt Swap